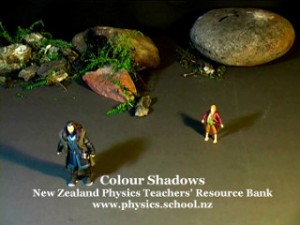 You may have noticed while walking on a city street on a moonlit night that you have two shadows, one bluish and the other reddish. This phenomenon is explored and explained in a demonstration that can be set up easily.

Bilbo Baggins and Thorin Oakenshield, who saw many strange things on their travels, were quite surprised to see their double shadows take on strange hues. But why does this happen? This phenomenon can be observed on city streets where the reddish and bluish shadows sometimes appear to be painted onto the concrete footpaths. It arises because the spectrum of moonlight contains more blue while the light from sodium streetlights is more reddish. A uniform background, such as the concrete footpath illuminated by both the moon and the sodium streetlights, appears approximately the same colour that it would under a white light. If an object casts a shadow in the sodium light but not the moonlight, then light from that shadow contains less red than light from the surrounding background and appears bluish. Similarly where an object casts a shadow for the moonlight but not the sodium light, then light from the shadow contains less blue and appears reddish. See the diagram below.

All one needs is two anglepoise lamps and light bulbs with quite different colour temperatures. We have used two compact fluorescent bulbs with colour temperatures of 6500 K (daylight) and 3000 K (warm white).  The scene is set up with both lights illuminating the scene from different angles. In places where both lights shine the scene is illuminated in white light, but if an object blocks the bluish light a reddish shadow is produced and if an object blocks the reddish light a bluish shadow is produced. A white or light grey background works best.

This teaching resource was developed in collaboration with a student from He Huarahi Tamariki school in Tawa, Wellington, New Zealand, and Victoria University of Wellington demonstrators.