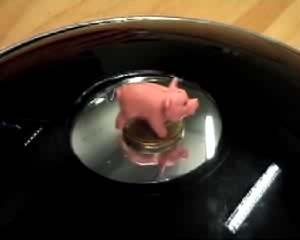 A small object appears to levitate above a hole. Will this illusion fool a cell phone camera? Remarkably a light appears to reflect off of the image!

In the photo at right, the piglet and coin seem to be levitating above the hole! It is really a very convincing illusion.

Formation of images, critical thinking, the behaviour of the human eye.

Place object (such as the toy piglet) at the centre of the bottom dish and assemble the cover mirror. The object will appear to float above the hole.

First of all, ask students whether their cell phone camera will see the piglet where it really is or whether it will be fooled as the human eye is fooled. Many will predict the camera will not be fooled but it is!

There is a paper in Physics Teacher, October 2006 that gives instructions for making a cylindrical device that produces a somewhat similar effect. The device is very inexpensive to construct. We made one quickly and it works well. (M. A. Caussat, H. Rabal, M. Muramatsu, The Levitating Buddha: Constructing a Realistic Cylindrical Pseudo Image, The Physics Teacher, Vol 44, Page 443).

The demonstration works reasonably well with a small LED light and we recommend you do it that way. Note the laser beam can emerge in unpredicted directions. At least exercise the usual laser safety practices and avoid the high power lasers that are commonly available now. The videos were made with a very low power laser.

www.optigone.com takes you to the web site for the manufacturer. The ray diagram above is taken from their web site.

You can also get inexpensive, smaller versions of this apparatus from science stores such as the Met Shop in Wellington.