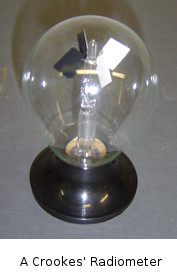 When lit by the sun, the radiometer vanes spin with the white side leading and the dark side trailing.

When placed in sunlight, the vanes spin with the white side leading and the dark side trailing.

There are no simple explanations of this behaviour and the matter is contentious. The physics of toys is not always simple.

One explanation has photons reflecting off the white side exerting a greater recoil force on the vane than photons being absorbed on the other, dark, side. So the vanes would spin with the white side trailing – which they don’t – so that’s wrong. Reflected and absorbed photons do exert a radiation pressure, eg, comet tails, but it is small. A Crookes’ radiometer does not have a high enough vacuum or a sufficiently sensitive vane system to respond to the difference in radiation pressure. A device that does respond to photon pressure is the Nichols radiometer.

Another common explanation says that the dark side, having absorbed more of the sun’s infrared radiation, is warmer than the white side. Molecules of the residual, low-pressure air in the radiometer therefore bounce off the dark side more vigorously, causing the vanes to spin dark side trailing. The spin sense is right, but problems remain.

Warming of the layer of air next to the dark side increases its pressure slightly. It expands with reducing density until the pressures equalise. So although the molecular rebounds are more forceful, they are less frequent. The pressure difference across the vanes disappears and the rotation should eventually stop.

However, in a 1924 paper, Einstein pointed to an edge effect. Near the edges of the vane, the expansion of the warmer gas is obliquely, rather than directly, away from it, so the pressure difference persists on a narrow strip around the edge. The width of the strip is about the average distance between molecular collisions, the mean free path, which, for a radiometer bulb pressure of typically 15 Pa, is about 0.5 mm.

The heat of your hand will spin the vanes – for a while. Why does it stop when it will spin continuously in sunlight?

What happens when you put the radiometer in the freezer? Does it spin and, if so, which way?

Put the radiometer in sunlight or near a bright light bulb and watch it spin.

Photon pressure is small, but steady as long as light falls on the surface. The use of solar sails to propel spacecraft has been used on a small scale.